The strive to replace the laptop with a mobile device

A few decades earlier, each task we had, demanded a specific piece of technology.Listening to music, watching videos, taking photos and gaming all required a  unique and different set of devices manufactured by different companies.The purposes associated with each device were clear and different from others.As technology itself evolved, the way we use these devices and the number of gadgets we use a lot of uses.That is how the world of“smart device” has become.Now the single, small smartphone is responsible for most of the daily activities of the average man.However even as we possess very powerful devices, it is not rare to find users with separate devices for different uses even if only one device is capable to perform all the tasks.No company has been able to  truly manufacture the one single device which would be able to perform all tasks of the average person while respecting aspects like portability or performance.we are always trying to transfer data or drives from one device to another or using cloud services to be able to access the data from different devices.There are still a few categories of devices that the small, Portable,the smartphone has been unable to conquer.The PC, (or laptop which is basically a portable PC) has been around for ages yet the smartphone has been unable to fully take it down despite having many of its functions.One of the first companies which attempted to fully replace the PC was Microsoft :

On 21 October 2010, Microsoft released its windows phone.Microsoft entered the smartphone industry aggressively, with an operative system of its own thereby pinning it against the two most dominant mobile operating system on the market.By releasing a mobile version of its own OS(at the time of release it was windows 7), the company probably hoped to draw the hundreds of millions of windows powered PC users onto their new devices. They had much hope for the windows smartphones in the beginning.However, according to the article by Greg Keizer, a senior reporter for Computerworld in August 2016, The sales of windows phone fell from 8.2 million to less than 2 million from 2015 to 2016.The windows phone was later discontinued. The Microsoft device lacked a lot of things.Compared to the other mobile operating systems, it lacked the enormous amounts of apps.It also lacked the full desktop experience that the PC provided even though it had nearly the same application and the enormous capability for gaming that the PC had.Many understood that the specifications of the windows phones albeit quite powerful for the smartphones at that time  was not enough to replace the PC.They also got to know the affinity that many users had with the full desktop experience. 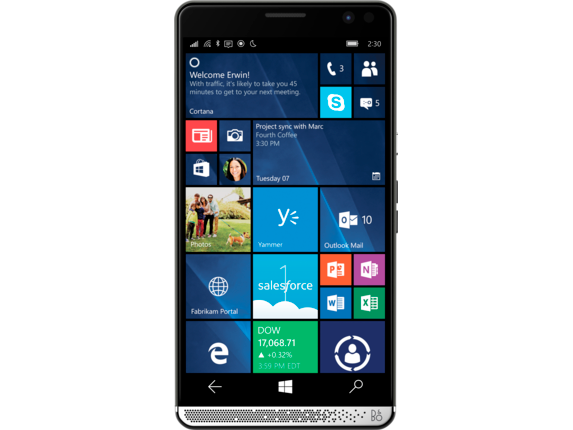 One of the last mobile devices to have the windows 10 is the HP Elite x3.The x3, as the name suggests, was able to be used in multiple ways. Microsoft partnered with HP to release the device in late 2016. It came along a dock, which could then be connected to an external monitor, keyboard,  and mouse, hence giving the full desktop experience that all users.Along with its Qualcomm® Snapdragon™ 820 processor.64 GB internal memory, 4GB ram memory water,  and dust free capabilities.it had a price tag of approximately $500.The HP x3 was designed to be one of the greatest windows device ever made.it could be used as a mobile phone and at the same time be used to have a full desktop experience using the same device without having to transfer data or physical drives from one device to another.Theoretically, it should have been a success.HP marketed the whole device for professionals.The company even released various videos marketing how the device would be useful to various professionals.

Nevertheless, it was a failure considering the small number of units sold.The x3 was a failure even while considering other windows phones.The professionals the device was marketed at, did not even consider buying the device.Part of it might be due to the bad reputation or decline in popularity that windows mobile devices had.It might also be that the windows OS for mobile was not challenging enough for the IOS or Android counterparts or that cheaper PCs with much better specs were available.Gaming on this device was also not possible.The HP elite x3 is still on sale even today even though it is considered a dead technology.

On 21 April 2017, Samsung unveiled its new flagship S8 and S8+ devices with its amazing infinity display.One of the major innovation Samsung advertised was its ability to be connected to a separate mouse, keyboard and screen to have the full desktop experience using a dock to connected the phone much like the HP Elite x3 device. Even though the x3 and the s8 did not have much difference(purely considering the specs of the devices), the S8 was a much bigger success compared to the x3. Samsung partnered with Microsoft in order to maximize the usage of the Microsoft office apps in the Android desktop experience.

Samsung has shipped more than 20 Million units of the S8/S8+ and is still going strong.People have appreciated the Android desktop experience much better.But either way, the Samsung flagship phone has many other good selling points and even the cool desktop android is unable to run most games due to lack of good enough graphics.Even though the S8/S8+ was a  good endeavor, it did not reach the level of even an acceptable single device.

Recently the company much involved in gaming gear released its phone.The Razer has a screen of 120 Hz and is advertised to be a phone for gamers.At the CES 2018, Razer announced its project,  Linda. The project is still a prototype and it is still unsure whether or not the company will go with its production.Project Linda follows a similar concept with the S8 and x3 but with a little more innovation.Project Linda consists of a kind of a laptop(aesthetically similar to the Razer blade stealth) with a dock instead of a trackpad.Users can dock the Razer phone which is then locked in place and used as a trackpad while enjoying the desktop experience. While it is not able to run all games demanding very high graphics, it will be able to run mobile games in the desktop way.while it is still not sure how the gaming community will see the project,  Linda, it sure has built a lot of hype among tech tubers.

It is now becoming possible to have very powerful and small devices at the same time.it will not be long until a single device able to perform gaming and productivity while considering portability is perfected.